How to Overcome Fear of Mistakes: One Coach’s Story 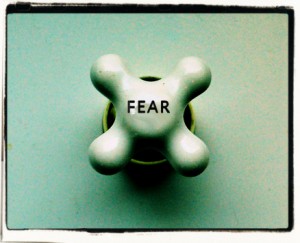 Scientists call it the “sweet spot” — that highly productive zone on the edge of our abilities where learning happens fastest. The problem, of course, is that the sweet spot doesn’t feel sweet. In fact, it feels sour and uncomfortable, because being there you have to take risks and make mistakes. And most of us hate making mistakes.

But what’s kick-assingly powerful  is when somebody finds a simple way to reverse that allergy. With that in mind, check out the following letter from Jared Mathes, who coaches a U-14 volleyball team in Calgary, Alberta.

The one problem I have on my team is having the athletes get over the fear of making a mistake.  We do great in practice, but during a tournament, the more “important” the game, the more they regress to predictable, safe playing.

To overcome this, we discussed as a team a few weeks ago that the March 17 tournament would be a “throw-away”.  We didn’t care about the outcome. If players played aggressive they would never be in danger of being subbed off, no matter how many mistakes they made.  Everyone bought into the system and was willing to give it a try, except for about half of my parent group.  They had a hard time accepting the fact that we were going to let the girls figure it out and let them “go for it” on every ball regardless of the score or the stakes.

As we started the day, we had serves going out and wide. But the team was relaxed and having fun.  If they didn’t get a great spike in one rally, they tried even harder the next time.  They saw that by making positive errors, often the other team would still go for the ball and touch it, giving us a point.  As the day progressed, they were becoming more confident.  I had athletes who had never attempted jump serving, trying it and succeeding.  Our play was getting more aggressive as the day went on and we were constantly winning.

We made it to the semi-finals and all of my doubting parents were congratulating me on  the genius of the approach to the tournament.  They couldn’t believe how well their daughters were playing, and it was just getting better.  I cautioned them and reminded them that the focus has to be on the process, not the outcome, and that even if we were in last place, it would still have been a worthy strategy for all the teaching it provided. We played with the most aggression and intelligence we have ever done. We hit from everywhere on the court.   It was beautiful to watch.

In the second game of the finals, we were behind 23-19. My athlete who was up to serve was one who had discovered her jump serve throughout the day.  In the past, she would have regressed and underhand served because she had no confidence in her overhand serve during a critical time in the match.  However, with no fear of messing up, and having the entire bench and coaching staff cheering her on to “go for it!”, she let fly an amazing jump serve.  Ace!  The score is now 23-21 for them.  She goes up to do it again.  I look over and her mother is covering her eyes.  This player has never served 2 jump serves in a row and her mother can’t watch.  We’re all cheering her to go for it.  Again, Ace!.  Score is 23-22 for them.  Confidently, she goes back to serve again.  She ends up serving 3 more aces, all off of her newly found jump serve and we win the tournament.  The bench is going crazy and the parents are ecstatic.  I think her mother suffered a minor heart attack.

After we clear the court I gather the team around and ask her in front of all the players how it felt to “go for it!” when we were down by 5 and ended up winning the match and the tournament!  With tears in her eyes, all she could say was “It was awesome!”

I love this story for a bunch of reasons, but mostly because it shows the power of redefining failure: of providing a space where mistakes aren’t merely tolerated, but seen as a productive, essential part of the process. Positive errors — what a wonderful term.

The other takeaway, I think, is this: coaches and parents are storytellers. Their job is to create an emotional safe zone where players can go to the edges of their abilities and then beyond. Jared’s wisdom was to change the story — this is a throwaway tournament — and that nudged his players into the sweet spot.

Which, as they discovered, is pretty freaking sweet.

(Big thanks to the great coach and teacher John Kessel for sharing Jared’s letter.)